Bitcoin SUPPLY CRISIS: How Supply Dictates The Price Of Bitcoin…

Bitcoin is a decentralized, censorship-resistant, secure and borderless digital currency. It’s kind of like a digital form of cash, but unlike fiat currencies, there’s no central entity that controls it. Instead, the Bitcoin network is controlled and operated by thousands of computers around the world.

Bitcoin was the first-ever cryptocurrency. It was proposed in 2008 and first introduced in 2009. At its launch, it provided the possibility of transacting with others without the need for traditional financial intermediaries. However, over time, Bitcoin has found its niche as an amazing store of value.

Although you can use Bitcoin for cheaper, faster and more secure financial transactions, many people choose to buy and hold Bitcoin for the long term. This is because Bitcoin is a fantastic hedge against inflation and it’s investment thesis is based on the belief that its unique nature of scarcity, divisibility, durability and counterfeit ability – combined with global availability and high liquidity – make it an ideal medium for storing wealth.

New Bitcoins come into circulation through the process of mining. This is essentially the process where computers validate a transaction on the Bitcoin blockchain in exchange for being financially rewarded with a certain amount of Bitcoin. This is what incentivizes miners to run computers that can operate the Bitcoin network.

Bitcoin has a hard supply cap of 21 million. This means that there will never be more than 21 million Bitcoins in existence. However, a lot of Bitcoins have already been destroyed and lost, which would roughly take the total amount of Bitcoin to ever be in circulation to roughly 18 million.

Since its inception, Bitcoin has been the best performing asset, period. It is a prime example of how supply and demand can affect the price. A strong demand, partnered with limited (and decreasing supply over time), in addition to its unique properties make Bitcoin a strong contender for the most ‘sound’ store of value in history.

As demand continues to increase and supply becomes more and more scarce, the price of Bitcoin will inevitably increase as it becomes more sought after.

Like every asset, Bitcoin goes through market cycles where the price goes through both bullish and bearish periods. Bitcoin bull markets are usually kicked off by the Bitcoin halving event which takes place every four years. This is where the amount of Bitcoin that miners receive for validating transactions halves. This means that over time, the introduction of new Bitcoins becomes more limited, which contributes to a reduction in new supply.

The next Bitcoin halving takes place in 2024, where the reward for validating a transaction will reduce to 3.125 BTC.

The future of Bitcoin will be very different compared to the previous decade. The liquid supply of Bitcoin peaked in early 2020 and it’s very likely that it will never be that high again. As demand rises and liquid supply slowly reduces over time, there will be a supply crisis over the coming decade.

The graph below shows the liquid and illiquid supply of Bitcoin since its inception – and at the moment it’s indicating that liquid supply is rapidly falling. 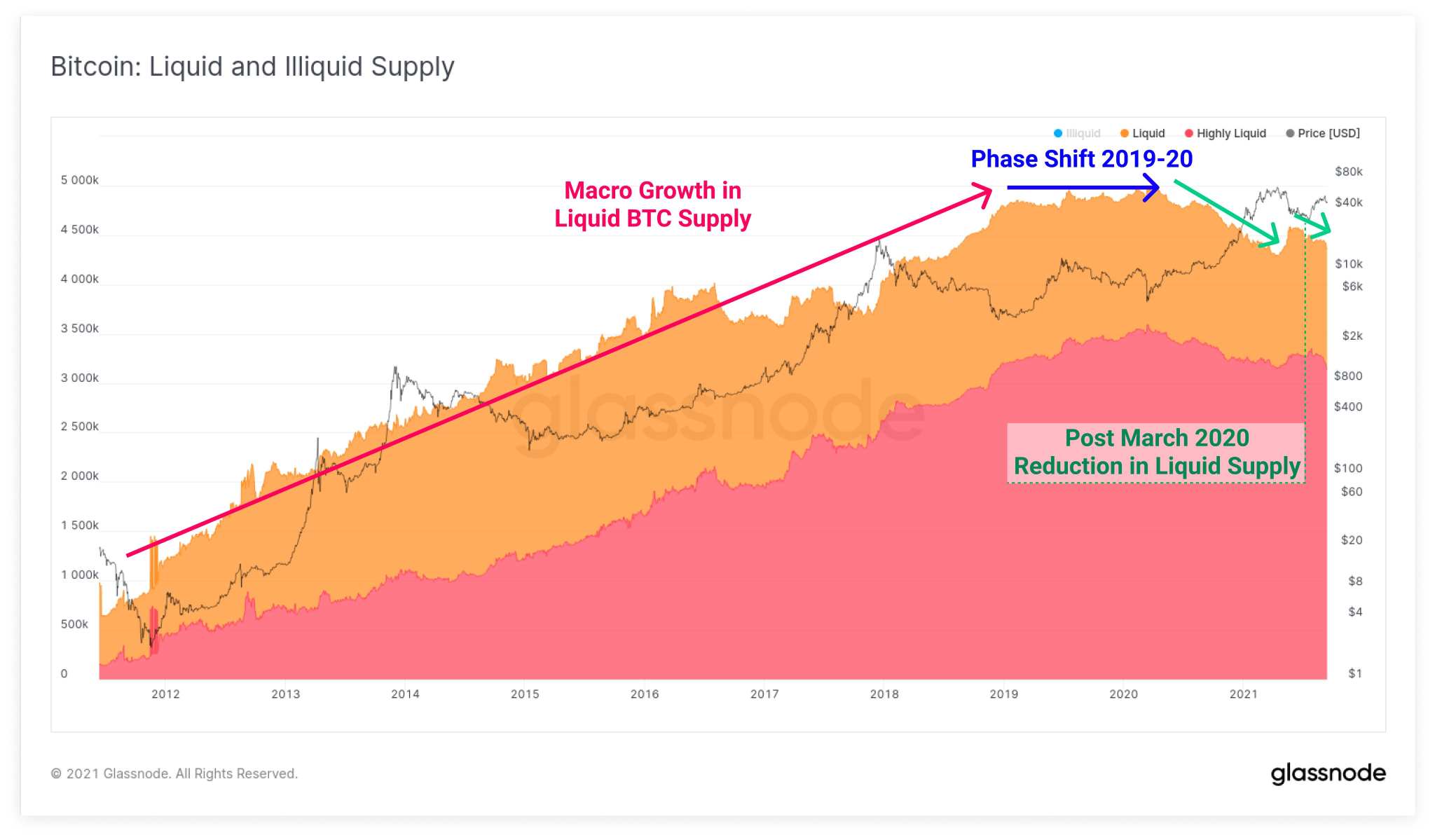 This would suggest that more and more Bitcoin is being bought up and locked away in cold wallets and DeFi protocols meaning that liquid supply would reduce. This reduction in liquid supply partnered with an increased demand for Bitcoin, primarily because of network effects, will have a significant impact on the price of Bitcoin going forward. In order for the price of Bitcoin to increase, demand and buying pressure must trump both the new and existing supply, which at the moment it is.

On top of that, Bitcoin supply on exchanges is at a three-year low, which indicates that more and more people are withdrawing their Bitcoin from places that they could easily sell in order to hold in more secure places for the long term.

As supply becomes more illiquid, Bitcoin becomes more scarce. As both retail and major institutional adoption picks up, more and more Bitcoin will be taken off the market. This means that there will be less Bitcoin available for purchase and when more people have the desire to own Bitcoin, the supply shock will cause a significant surge in price.

Historically speaking, golden crosses are better indicators of long-term momentum shifts in the market rather than the potential for short-term price action. As of right now, hopefully, the recent golden cross will be an indicator that a second leg to this market cycle is incoming, which could see the price of Bitcoin surge to above $100,000. From there, immense selling pressure will most likely cripple the price of Bitcoin and human emotion will trigger a bearish period until demand picks back up again. This bearish trend will most likely continue until the next Bitcoin halving in 2024.

For investors, being ahead of the herd is the absolute best way to profit. The inevitable bearish period in the coming years presents amazing opportunities to accumulate Bitcoin, while a lot of people have lost interest in and exited the market. Of course, by accumulating, you are hedging your bets that the demand for Bitcoin will pick up again. But historically speaking, continuous and regular buying over the long term has been the most successful Bitcoin investing strategy…